During Week 6, we started framing the third (SE) house and laying out trusses for the two northern homes. Two more UAF students   began working at the site for a total of four. The crew is jelling and construction is on schedule! It warmed up to 65 degrees this week, and the T-shirts and bug dope came out. Next week we are planning to finish roofs on the northern homes and begin plumbing and electrical work. Then we’ll add sheathing and trim. Meanwhile, we’ll begin framing the fourth and final house, which will likely have the Reina Wall–a double wall with thick blown-in cellulose insulation developed by local builder Thorsten Chlupp of Reina, LLC. 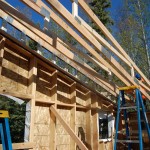 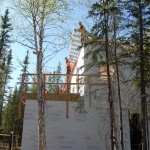 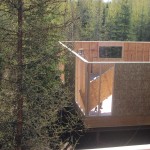 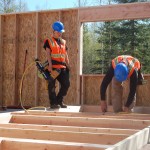 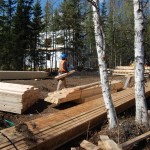 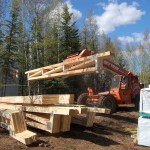