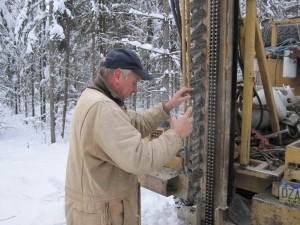 The University of Alaska Fairbanks (UAF) and the Cold Climate Housing Research Center are gearing up to break ground on the UAF Sustainable Village, a super-efficient campus housing project planned for this summer. CCHRC designers have developed the building form and floorplan as well as the envelope and foundation design.

Site clearing of four lots took place in November, and UAF scientists drilled two 30-foot boreholes for a soils analysis in February. The west site revealed strong, stable soils, with silt and gravelly sand, while the east site revealed marginal soils with six feet of silt and peat on top, then three feet of ice-rich silt, and below that fine sand and gravelly sand. “The east site will be the best place to test some innovative foundations,” said CCHRC designer Aaron Cooke.

Now the team is focused on structural engineering, construction detailing, and planning mechanical, electrical, plumbing, and other systems.

Meanwhile, students are involved in the project at many levels—creating cost analyses for renewable energy systems, helping CCHRC with the foundation design, and setting up a social study of the Village. 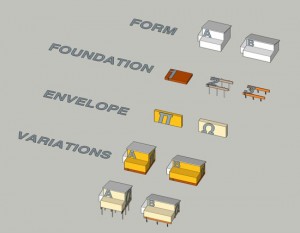 The four houses will demonstrate various combinations of foundations, envelopes, and form. 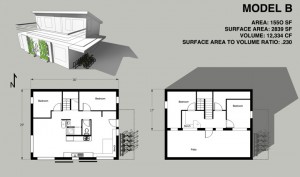 Concept and floorplan for two of the four homes.