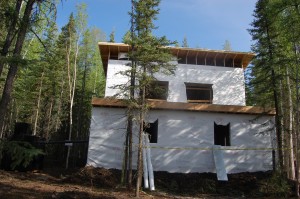 House wraps, such as Tyvek, are permeable enough to allow water vapor through but will stop bulk water like rain.

Vapor barriers and house wraps are a critical part of controlling moisture and air flow in and around your home. Working in conjunction with your walls, floor, and roof, the right type and application of these products will help you to conserve energy, prevent mold growth, and maintain the structural integrity of your home. Not using these products or using one incorrectly can wreak havoc.

Vapor Barriers
A vapor barrier, also known as a vapor diffusion retarder, is a layer of material designed to slow or nearly block the movement of water vapor. How much a vapor barrier impedes the movement of water is referred to as its permeability rating or, for short, “perm” rating. So it’s a bit misleading to use the term vapor barrier because many materials in this category do allow some moisture through. 6 mil thick plastic sheeting is a typical vapor barrier material prescribed by codes in extreme cold climates, as it’s perm rating is extremely low.

All homes generate moisture indoors. Cooking, bathing, breathing – all these activities create water vapor. Ventilation, which is essential to exchange moisture-laden air with clean dry air, helps to reduce the quantity of moisture in your home, but not enough to eliminate the need for a vapor barrier. Without a barrier, moisture can penetrate your walls and roof spaces.

Approximately 98 percent of water vapor in a home travels by air, but the remainder moves by diffusion – through solid materials such as the studs in your walls. When these materials become cold in winter, condensation forms and can trigger mold growth and other problems. The extreme air pressure and temperatures differences that occur in Fairbanks in winter exacerbate condensation problems. And, in the case of modern construction, tight building envelopes can serve to concentrate moisture problems in the absence of adequate ventilation.

House Wraps
House wraps, on the other hand, are designed to be permeable enough to allow water vapor to pass through them, but will stop bulk water like rain from passing through – sort of like Gortex in clothing. In addition, house wraps can help minimize the movement of air in and out of the exterior walls. Losing air from a house in an uncontrolled manner means that you are losing heat. This loss amounts to extra fuel costs and can become a burden on your budget.

To effectively repel water and reduce airflow, house wraps must be detailed correctly and applied using the manufacturer’s recommended methods and adhesives. All those protrusions through your walls such as vents, electrical connections, and architectural features must be carefully accounted for. The right types of house wraps can perform an important job in windy places by stemming significant heat loss.
Now comes the tricky part: some house wraps can also serve as vapor barriers and vice versa. Placement and permeability is also a fairly complicated issue. There may be certain cases when house wraps are not necessary, but when used are almost always placed on exterior of a house and over its sheathing.

More
The placement and permeability of vapor barriers and house wraps are addressed by building codes, but vary by region. Vapor barriers are required in Fairbanks. This article only touches on the details required to choose and install vapor barriers and house wraps. You can find resources at the CCHRC and the University of Alaska Fairbanks Cooperative Extension Service to help you make the right decisions. Doing your research up front can save a lot of problems later on.