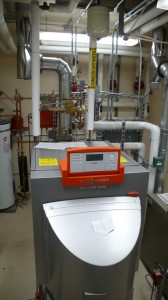 Many homeowners use the same appliance to heat both their house and their domestic hot water. These multipurpose appliances are called combined or integrated systems.

Hot water for space heating goes into a hydronic distribution system or to coils for forced air distribution, while domestic hot water goes to a storage tank or directly to the faucet. Combined systems work with several types of appliances, including boilers, ground source heat pumps or solar thermal systems.

Combined systems offer several advantages over distinct systems. Since an integrated system provides both domestic hot water and space heating, you have fewer appliances to maintain. During the heating season, it’s more efficient to have a single appliance providing both hot water and heating because you have fewer on-off cycles. It also saves space.

On the downside, combined systems can be less efficient when the heating appliance only fires occasionally—in summertime, for example. In addition, it’s tough to measure the efficiency of combined systems because the rating on the appliance (known as the AFUE) only applies to space heating, not domestic hot water. A heating contractor or someone who owns the same appliance can give you a better idea of the actual efficiency.

There are two types of combined systems—storage tank and tankless. Storage tank systems are most popular. In this setup, the appliance simply sees the hot water tank as an additional zone, but one that is separated from the space heating system to avoid contamination of the drinking water. When the domestic hot water tank calls for heat, the appliance sends heat to that zone. Having a storage tank forces the appliance to fire only a few times a day to provide hot water. This design is more efficient than a tankless coil system because the appliance doesn’t have to fire as often, which is an energy-intensive process. Also, since there is no burner on the storage tank you can add extra insulation to the tank to save energy.

Tankless hot water systems, also known as on-demand heaters, only produce hot water when you call for it—by turning on the sink, shower, or other appliance. They heat water instantly as it runs through a pipe and deliver it to your point of use, so you don’t have to store hot water in a tank and heat it all day. These on-demand heaters can be powered with propane, natural gas, or electricity.

You can save energy with this kind of system because you’re not paying to heat water when it’s not being used and you eliminate stand-by heat losses. Another benefit is that you never run out of hot water, unlike a tank system.

But a tankless system is prone to control and pressure issues. One problem is that on-demand heaters can produce bursts of cold water. For instance, if you finish taking a hot shower and turn off the water, the heater will shut off but the water in the pipes will remain warm (because they’re insulated). Yet the water inside the heater will cool off. So the next bather thinks the water is hot, jumps in, and soon gets a blast of cold water making its way through the pipes.

Another limitation of tankless heaters is that they can only heat a certain amount of water per minute. So if the washing machine is turned on during a shower, the hot water is split between the two uses, reducing water pressure all around. The good news? Both of these problems can be solved by adding a couple accessories to your system.

You can prevent cold bursts of water by adding a small, 2- to 10-gallon electric water heater (like a mini water tank) in between the tankless water heater and the point of use. This creates a buffer between sections of chilly water and your showerhead. The heater and installation will cost about $450.

The pressure issue can be fixed by adding a large pump to the system that can push enough water through the heater to accommodate multiple hot-water users at once. Adding the pump will cost about $650.

These add-ons drive up the price of a tankless system from around $300 (for the low end) to more than $1,000. Meanwhile, a hot water tank costs between $200 and $900. If you can live with idiosyncrasies like variable temperature and pressure, and don’t want the add-ons, then the tankless system will pay off in just a few years (thanks to energy savings). If you desire a system that is free of idiosyncrasies, the payback period will be much longer.