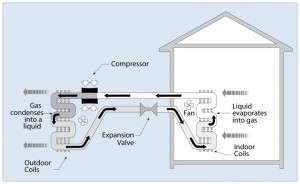 Air source heat pumps (ASHP) are a heating appliance that act like a refrigerator in reverse.  Where a refrigerator removes heated air from its interior and transfers it to the room, an air source heat pump extracts heat from outside a house, and transfers it to a home’s interior. Using an ASHP in colder climates seems counterintuitive, but the truth is that “cold” outdoor air still contains heat, and an ASHP uses electricity to “step up” that heat to a temperature useful for space heating. Until recently, ASHPs have been used in areas that only experienced mild winters.  However, ongoing advances in technology have resulted in ASHPs that can be installed in colder climates.

Southeast Alaska is a promising candidate for ASHP heating appliances, because it has a milder climate than the rest of the state and access to affordable hydroelectric power. Because ASHPs take some heat from the outdoor air and require less electricity than electric baseboards, they have the potential to reduce heating costs for homeowners who previously heated with electric appliances.

However, there is still uncertainty about the performance of ASHPs in cold climates, and about the barriers to their adoption in Alaska.  CCHRC is planning to explore the opportunity of using ASHPs in Southeast Alaska in a new project: Southeast Alaska ASHP Technology Assessment.  We will conduct a literature review, interview installers, distributers, and ASHP owners, create an inventory of existing ASHPs in Alaska, and model their economic and heating impact.  If you are interested, look for the Technology Assessment on our website in early 2013! 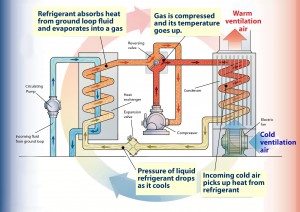 A heat pump harvests energy from the ground to use for space heating for your home.

A ground source heat pump (GSHP) is a space heating appliance that uses electricity to convert geothermal heat to a temperature that can be used for indoor heating. They are common in the Lower 48 and quite popular in Europe. There are also several GSHP systems in Alaska, including commercial systems at the Juneau Airport, Weller Elementary School in Fairbanks, and the Alaska SeaLife Center in Seward. Fairbanks has more than 10 residential systems as well.

In the winter, ground source heat pumps work like refrigerators in reverse. Instead of taking heat from the inside of the refrigerator and rejecting it outside, a GSHP gathers heat from the ground, steps it up to a higher temperature using a compressor, and then “rejects” it inside a house. In the summer, some GSHPs can run in reverse mode to provide air conditioning – taking heat from a house and rejecting it to the ground. The main “fuel” for a GSHP is geothermal energy, but it uses electricity to run the compressor. Since the electricity is only acting to boost the geothermal heat (which is free), heat pumps are more efficient than electric heating appliances.

Ground source heat pumps are considered a partially renewable technology, because the heat they take from the ground comes from solar and geothermal sources. They are entirely renewable if the electricity they use comes from a renewable source, such as solar or wind. Heat pumps are also very safe to operate, because there is no combustion. They can, however, be expensive to install because you have to excavate land or drill to establish the ground loop. Talk to an installer if you think a GSHP might be right for you.

For more information on ground source heat pumps, see a report by the Cold Climate Housing Research Center and the Alaska Center for Energy and Power: http://cchrc.org/docs/reports/Ground-Source-Heat-Pumps-in-Cold-Climates.pdf. It covers the performance, cost and payback of GSHPs in various regions of Alaska.

Our new report shows that ground source heat pumps are an effective and affordable technology for parts of Alaska, including Fairbanks, Juneau and Seward.
In this video, CCHRC researcher Colin Craven discusses how heat pumps work and what you have to think about before installing one in Alaska. 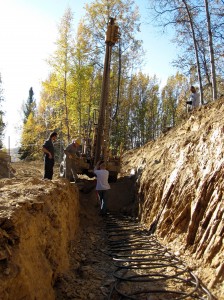 Ground source heat pumps offer an economically viable heating option in some places in Alaska, according to a new report from UAF’s Alaska Center for Energy and Power and the Cold Climate Housing Research Center.

The study found that the systems, which extract heat from the earth, are technically and economically viable in areas with high heating costs and low electric costs. The report, funded by the Denali Commission, offers the first in-depth assessment of ground source heat pumps in Alaska.

“There recently has been quite a bit of excitement about ground source heat pumps, as people are seeking more affordable heating options. Our report helps explain the technology in the context of Alaska, and analyzes its potential throughout the state,” said co-author Colin Craven, head of product testing at CCHRC.

There are roughly 50 heat pumps in Alaska, including high-profile commercial installations at Weller Elementary School in Fairbanks and the Juneau Airport Terminal as well as several residential installations around the state. A heat pump transfers energy from the earth or water to use for heating or cooling. The system consists of underground tubing filled with heat-transfer fluid, an electric pump and a heat distribution system.

Researchers reviewed the industry in Alaska, interviewed ground source heat pump owners and assessed the performance and economic viability of the technology in five cities: Fairbanks, Anchorage, Juneau, Bethel and Seward. They compared the cost and performance of heat pumps with traditional heating systems in an average-sized new construction home in each city. They found that heat pumps could match or beat other heating systems in Fairbanks, Juneau and Seward.

“Even though the ground source heat pumps have high up-front capital costs, which is what deters people from installing them, they end up costing less over 15 years just because you save so much money on annual energy costs,” said Dominique Pride, graduate researcher at ACEP and co-author of the report.

The systems are most economical in Juneau and Seward, where heating oil is expensive and electricity costs are low. They also potentially make sense in Fairbanks, which has more expensive electricity than Southeast and Southcentral but also higher heating demand and costs, thus more room for energy savings.

The analysis found the pumps are not economical in Anchorage, which has low heating and power costs thanks to inexpensive natural gas. And they are not viable in Bethel and most of rural Alaska because of its extremely high electricity costs.

In addition to economics, researchers looked at cold climate considerations on system performance, including the impact of ground source heat pumps on soil, as extracting heat could create more permafrost if the ground temperature doesn’t recover in the summer. Researches plan to install a pump at the CCHRC next year to further study the effects and viability of the systems.