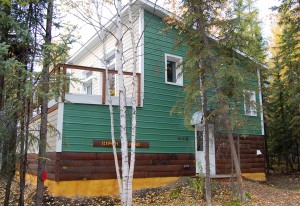 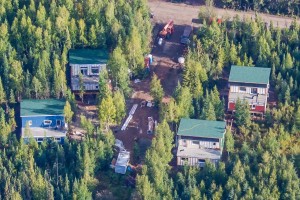 The UAF Sustainable Village is a community for students who are passionate about the environment and reducing their carbon footprint. It is a collaboration between the UAF Office of Sustainability and the  Cold Climate Housing Research Center  to build and research energy efficient housing, renewable energy, and innovative heating and ventilation systems. Students at the Village make a commitment to sustainability through monitoring the systems, conserving energy and water, and helping develop additions like a greenhouse or community center.

On Wednesday we will celebrate the opening of the Village with a ribbon cutting on-site and words by CCHRC President Jack Hebert, UAF Chancellor Brian Rogers, student workers and student residents.

11:30—Press invited to tour the interior of a student home

12:15—Move to CCHRC for brief ceremony—student posters on display

It’s finishing time at the Sustainable Village! The devil is in the details, and we’re detailing ceilings, floors, corners, railings, trim, and everything else. The time lapse shows workers installing beautiful birch paneling on the upstairs ceiling as well as cabinets and appliances.

This week we tried a new building system at the Village–a cellulose REMOTE wall in the SW house. A REMOTE wall has the majority of the insulation value, or R-value, outside the sheathing rather than inside. Up to this point, we always used rigid foam on the exterior. But since one goal of the Village is to test new techniques for both cost and energy use, we decided to try a REMOTE wall with batts as interior insulation and 9 inches of cellulose on the outside.

The house has two sets of studs, with sheathing applied to the inner wall. The inside wall cavity is filled with a recycled batt insulation. The outer wall was wrapped in Tyvek. To insulate the outside wall cavity, we hole-sawed a 6-inch hole in the sheathing in each wall bay (on both floors) and sprayed in 12 inches of dense-pack cellulose. Those holes were patched with poly sheeting and acoustical sealant. The whole wall is 18 inches thick.

We also installed birch paneling ceilings, cabinetry, and ventilation systems in 2 of the homes. The homes are mostly sided and are starting to look very livable!

Is it just us, or is this summer going fast?

As the daylight wanes to only 18 hours a day, we are getting situated to capture this heat at the Sustainable Village. The solar collectors are up on the northeast and southeast homes, which both have three 4-foot-by-10-foot collectors mounted on the south-facing wall just under the roof. The system will feed heat into radiant tubing in the concrete floor slabs, and will also dump heat into a 120-gallon solar storage tank in the house. We are adding temperature sensors and flow meters to each system to monitor how much heat is used.

Also, the homes have skin (for the most part), i.e. metal siding. Two green, one blue, and one gray with patches of other colors and salvaged dredge pipe. They look cheerful and also at home in the spruce forest.

We continued siding, insulating, and Sheetrocking in Week 14. We began hanging a reclaimed steel siding that came from old dredge pipe in the surrounding area. It will provide an accent to the metal siding, adding a cool aesthetic and historical value to the homes. 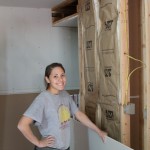 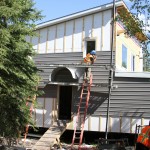 gray siding on the NE home 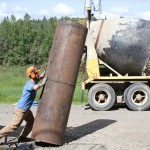 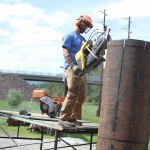 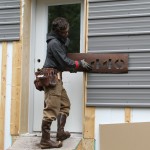 testing out some addresses 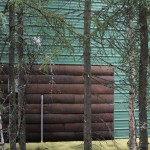 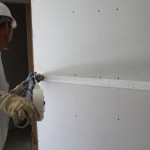 taping Sheetrock on the NW house 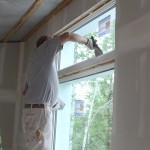 The Village now has roofs. Roofers came and installed the green rubber-based shingles on all four homes in a single day. We also blew in roughly 2 feet of cellulose insulation underneath the NW roof, which will have a continuous 2-inch air gap between underneath the roof deck to keep the roof cold and dry.

We continued building REMOTE walls on the NE home, which will have 6 inches of interior fiberglass insulation and 8 inches of EPS foam board for 2/3 of total R-value on the outside.

During Week 12, we insulated walls of the second house with six inches of fiberglass batting on the inside and 8 inches of foam board on the outside. We also blew two feet of cellulose insulation into the roof of the first two homes. Cellulose is made from recycled material like newspaper and cardboard.

We also began installing windows in the homes. All windows are triple-pane, low-e argon filled, designed to minimize heat loss and avoid condensation in an extreme climate.

Each home will be sided with a different color combo, with a mix of metal siding and recycled steel pipe.

Week 11 was a productive one at the Sustainable Village. Workers continued to install EPS foam (2 layers of 4-inch sheets) in three of the homes with a REMOTE wall system. We also sprayed polyurethane foam around the rim joist to seal it up.

Each home has a large, south-facing deck on the second floor. We finished the decks with a spray-applied elastomeric coating, the same stuff used for truck-bed liners, a durable, weather-proof material that is less material-intensive than wood and requires no penetrations in the ceiling. We sprayed foam insulation underneath the deck in the first-floor ceiling to create a warm thermal break.

This week we started hanging Sheetrock in the homes where we had already finished plumbing and electric. The interior is starting to look livable! Now it’s time to select 16 lucky students who will make the Village home. If you’re interested, visit http://www.uaf.edu/sustainability/sustainable-village.

Do you seek a different style of on-campus life? Do you want to know how to grow your own food? Are you excited about monitoring and reducing your energy consumption? Are you aware of your personal carbon footprint? If you answered yes to these questions, consider applying for residency for the 2012-2013 academic year at the UAF Sustainable Village! 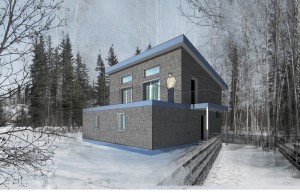 Rendering of one home at the UAF Sustainable Village

The UAF Office of Sustainability is now accepting student applications for residency for the 2012-2013 academic year at the new UAF Sustainable Village. This opportunity is for students seeking a different style of on-campus life, wanting to know how to grow your own food and monitoring and reducing energy consumption.

The UAF Sustainable Village, UAF’s newest student housing, is a student-led and -driven initiative. Students have been integral to all stages of the process: from concept to design to construction. It is a demonstration of environmentally sustainable technologies in a residential setting and will provide hands-on experiential learning opportunities. Students will collect and disseminate information about sustainable building and living best practices, and encourage others to live in a more sustainable way.