CCHRC is working with an education center in Bethel to help improve the energy performance of its new building.

Yuut Elitnaurviat is a vocational center that offers training in construction, health care, dental health aid, and other subjects for residents of the Yukon-Kuskokwim Delta region. 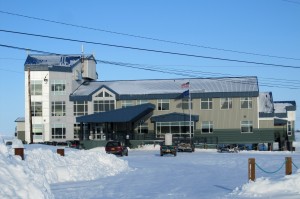 The new building at Yuut Elitnaurviat campus consumes more than 40 percent more than the average building in Alaska.

The school is spending more than 40 percent more than the average commercial building in Alaska for heating and power at its facilities—which includes a classroom, admin offices, a cafeteria, dormitory and shop—and the building is only a few years old. This stems from inefficiencies in heating, lighting, and ventilation systems, among others. For example, the air handling system is consuming more than its fair share of energy use and may be oversized for the building. In addition, the school is paying to heat much more domestic hot water than it actually needs.

CCHRC researchers visited the campus in March to explore options for improving the building’s performance.

“They’re paying almost 50 cents a kWh, and they’re using around 32,000 kWh a month, so it makes more economic sense to focus on the electric load than on space heating at this point,” said CCHRC research engineer Bruno Grunau.

CCHRC prepared a feasibility study of the local resources and found both wind and solar photovoltaic systems would be viable technologies. Researchers are now helping school officials plan a small wind farm and solar array. The wind farm could include up to 4-5 turbines, each producing approximately 6,000-10,000 kWh per year, and a 10 kW PV array that would produce approximately 8,500 kWh a year.

Building officials are also pursuing a commercial energy audit to find other economical ways to save energy, such as tightening the building envelope or installing high-efficiency lighting and daylight sensing.