Pellet stoves are similar to wood stoves, except they burn manufactured pellets instead of cordwood. Pellet stoves typically use electricity because they are partially automated: An auger moves pellets from a hopper to a combustion chamber, an exhaust fan vents combustion gases and draws in fresh air, and a circulating fan forces air through a heat exchanger and into a room. The stoves also can be controlled by a thermostat.

Pellets are about a half-inch long and are made from compacted sawdust, wood chips and waste paper (they resemble rabbit feed). They can be made from biomass fuels other than wood, including nutshells, corn kernels, agricultural crop waste, sunflowers and soybeans. They are bound together by pressure and heat (no glue is used). Pellets are sold in 40-pound bags at local hardware stores, or you can buy them by the ton from a manufacturer.

Many homeowners store pellets near the appliance because the hopper needs to be filled occasionally by either the homeowner or through a separate automated system. For small appliances only used occasionally, you may only need a few bags on hand, but bigger or more frequently used appliances will need a greater pellet supply. Below are a few guidelines to follow for storing pellets:

1. Ideally, pellets should be stored near the pellet-burning appliance for convenience. The pellet storage location must be accessible for re-stocking as well. If you have pellets delivered, call the manufacturer to make sure a delivery truck can access the site.

2. Pellets must be kept dry so they don’t crumble, ideally stored in an area with a roof and walls. If stored on the ground, they can absorb moisture from wet soil.

3. Since they will be burned in an appliance, they should be kept as clean as possible — protected from dust and other contaminants. On that note, delivery trucks that blow pellets into a storage area can cause lots of dust, so the room should be sealed off from the interior of a home.

4. In Alaska, pellet delivery trucks typically use a direct auger system to transfer pellets into a storage system. If you order pellets from a manufacturer, ask how they will be transferred to the storage area and protect any fixtures, lights or pipes that could be damaged. Make sure the storage area can support the weight of the pellets.

5. Finally, the storage area should have ventilation and a carbon monoxide (CO) detector near the door, as pellets can release CO when stored. Another option to alleviate CO concerns is to store pellets in a silo (inaccessible to people entering it) outside of the occupied building, with an auger feed system into the pellet appliance hopper and a CO detector near the

This last point is important because CO is a clear, odorless, and tasteless gas that prevents red blood cells from carrying oxygen. It is extremely dangerous because people cannot detect it. Typically, CO is associated with burning fuel in a combustion appliance, such as wood, pellet, oil or natural gas furnaces and boilers. CO can enter a home if a combustion appliance backdrafts, releasing combustion gases into a home instead of up the chimney.

Stored pellets can release CO, according to recent studies, though the amount depends on several factors, such as the age, content and exposed area of the pellets. This is especially a concern for enclosed storage areas that contain large quantities of pellets and are accessible to humans, such as for district heating systems or on cargo ships.

Not all pellets release measurable amounts of CO. Preliminary testing at CCHRC found no detectable CO emissions when the pellets were stored in a 30°F storeroom. Although when we sampled a plastic bag filled with pellets, sitting inside an 85°F room, the CO concentration in the bag was 60 parts per million (70ppm would trigger CO alarm if sustained for 1 hour). While the room may not have reached the same level as the bag (as the gas would have more space to diffuse), this shows the pellets have the potential to produce CO.

Be sure to take the proper precautions for a pellet storage area by ensuring the area is vented, installing a CO detector near the storage area, and being aware of the symptoms of CO poisoning. All homes with any kind of combustion appliance should have a CO detector in the living area to ensure combustion gases are not entering the home. 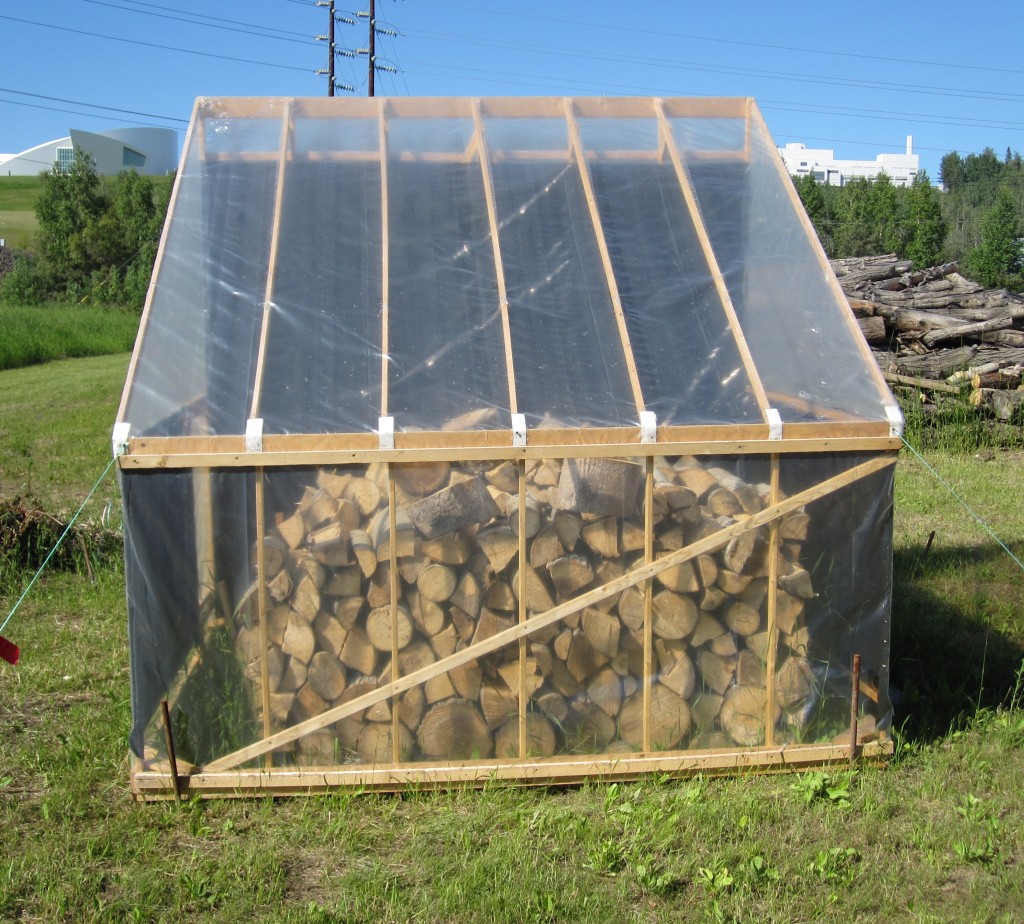 Firewood can dry in a single summer if split and stored properly.

While we won’t mention the dreaded “W” word, it’s never too early to start thinking about the heating season, when many Interior Alaska residents burn wood for heat.

While wood burning is a cheaper and more renewable alternative to heating oil, it also contributes to the air quality problem in the Fairbanks North Star Borough. Burning wet wood produces excess smoke and PM 2.5-sized particles, which disperse into the air and can be harmful to health. These emissions can be lessened by burning dry firewood. Fully cured wood — moisture content of 20 percent or less — is not only cleaner but also produces more heat.

How long does that take in this climate? It depends on the species of wood, when you harvest it, how you cut it and how you store it. A study at the Cold Climate Housing Research Center shows that wood can dry rapidly during a single summer — no matter when it’s harvested — but takes quite a bit longer over the shoulder seasons or winter. No matter what wood or method you use, firewood harvested in the fall won’t be fully cured by winter.

In our study, split wood harvested in the spring took anywhere from six weeks to three months to dry during the summer, depending on the storage method. Split birch and split spruce, for example, dried in one and a half months when stored in a simulated wood shed or left uncovered. In general, the fastest way to dry split wood was by storing it in a wood shed or leaving it uncovered, although uncovered wood is at the mercy of the weather and could be wet again by fall. When stored under a tarp, the wood took three months to cure.

Unsplit wood, on the other hand, didn’t cure during the summer in any storage scenario. Though it neared 20 percent moisture content by the end of the summer, it required another summer to reach a full cure.

Firewood harvested in the fall didn’t cure by springtime no matter how it was cut or stored. While it dried out somewhat in a wood shed (to between 30 and 40 percent moisture content), some samples got wetter under a tarp during the winter.

Several other factors should be considered when seasoning your wood. Spruce and birch tend to dry more quickly than aspen. Your drying times also will vary based on exposure to sun and air circulation (the more, the better).

The good news is that it’s possible to harvest firewood in the spring and cure it during a single summer — so you can stay cozy and burn cleanly during the winter. Just make sure to split it early and store it so it can dry.

The “Ask a Builder” series is dedicated to answering some of the many questions Fairbanks residents have about building, energy and the many other parts of home life.

Read more: Fairbanks Daily News-Miner – Ask a Builder How long does it take for wood to season