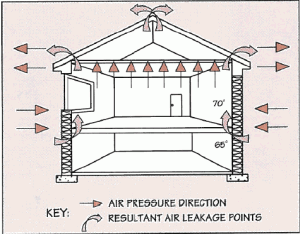 Stack effect (also called chimney effect) involve the air flow into, out of, and through a building. This air flow can produce some unwelcome side effects. An enclosed heated building in winter will have different air pressures at different heights (the result of differences in air density caused by of differences in indoor and outdoor temperature). To complicate matters, a taller structure such as a multi-story house will contain a taller column of air with greater pressure differences.

Everything starts with the fact that warm air rises and cold air sinks. Inside a home this means that warmer air moves towards the upper regions near the ceiling, producing positive air pressure at the ceiling level. It doesn’t end there though, because what’s going on outside the house influences the air pressures inside the house. When it gets very cold, the outside air is much denser than the heated indoor air. As a result, the positive pressure in the upper regions of the house can increase dramatically. Things are fine, however, until you have an air leak somewhere in the positive pressure zone. At this point, the warm air will rapidly exit the house through the leak. As warm indoor air leaks through the walls or roof, it cools and deposits moisture along the way and loses heat. It doesn’t stop there. New air to replace the air lost must come from somewhere. Replacement air will tend to take the path of least resistance. Typically air is drawn in through the lowest regions of the house, which is why problems with soils gases, such as radon, tend to increase in winter. Replacement air isn’t always just drawn in through the lower parts of the structure. Air can also come through poorly sealed or malfunctioning combustion appliances such as wood stoves and boilers.

The key to reducing potential problems with stack effect is good air sealing around penetrations in the building. If you are considering sealing air leaks in your house, it’s very important that you start at the top. If you start at the bottom, then you are potentially increasing the chances that the air leaking out of the top will pull air from other sources such as combustion appliances. Always be sure that you have a functioning carbon monoxide detector in your home and that your boiler and wood stove have a dedicated source of combustion air.