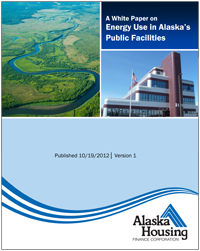 A new white paper by the Alaska Housing Finance Corporation gives the first in-depth picture of the energy use of public buildings in Alaska. By looking at comprehensive energy audits of 327 out of an estimated 5,000 public facilities, CCHRC researchers found that the average building can save $25,000 per year on energy just by modest investments in efficiency.

That adds up to $125 million annually in taxpayer savings. Many of these upgrades are easy and affordable.

Some examples found by AHFC energy auditors include adding occupancy sensors to lighting and ventilation systems, programming thermostats to lower the heat when buildings aren’t occupied and using digital controls to avoid over-ventilating building zones. Energy auditors also found many zero-cost ways to save energy by fixing operational issues such as turning off heat tape in the summer and shutting off backup pumps when they’re not needed.

Surprisingly, there was no correlation between the cost of energy in a given community and the performance of buildings. In fact, many of the same types of buildings in the same climate consumed vastly different amounts of energy, highlighting differences in construction and operation.

“That’s further evidence that many building managers don’t know how their buildings are performing, because they’ve had no one to compare themselves to,” CCHRC researcher Dustin Madden said.

This report provides facility managers with reference points in their climate and region, and gives tips from energy auditors on saving energy.

While the paybacks of energy improvements are often quick, funding can still be a challenge. Some organizations apply for legislative grants, bonds or funding from the Alaska Energy Authority.

AHFC has a $250 million revolving loan program specifically for state and municipal buildings to invest in energy retrofits. A portion of the energy cost savings are used to repay the loans.

Before now, little was known about the energy use of public facilities statewide. Understanding the performance of these buildings is the first step toward improving it. This research lays the groundwork for future policy decisions, changes in building design and education for facility operators and owners.

The public building audit project was led by AHFC and supported by federal stimulus funds. It included more than 40 auditors and engineers statewide. The recently published white paper on the findings was pulled together by the project leads, with Richard S. Armstrong as lead author and editor. Other contributors to the white paper were Alaska Energy Engineering LLC, Central Alaska Engineering Company, Nortech Engineering Inc., Renewable Energy Alaska Project and the Cold Climate Housing Research Center.

The report is available at: http://cchrc.org/docs/reports/Energy_Use_PublicFacilities.pdf.