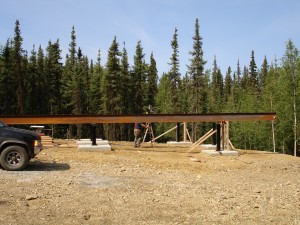 I-beams for a new home built on post-and-pad

Post and pad foundations are a common sight in Fairbanks, as they represent one of the least expensive approaches to building on unstable soils – of which we have no shortage. Usually the floor is raised several feet off of the ground, and air flows freely underneath.

It is standard practice in cold climate construction to install a vapor retarder on the “warm side” (indoors) of the exterior walls and ceilings. This keeps the water vapor generated in the living spaces during the cold seasons from entering the insulated cavities, where it can condense and lead to mold and rot. Installers typically use polyethylene plastic sheeting in a “6 mil” thickness, which is mandated by local building codes.

With post and pad construction, it may seem logical to also install plastic sheeting over the tops of the floor joists before laying down the subfloor sheathing.  In some cases however, it can do more harm than good.

If any rainwater leaks through the joints in the subfloor before the roof is on, it will be stopped by the plastic, and the floor may not be able to dry out quickly enough to avoid mold and decay. The same risks hold true if liquids are spilled on the floor once the house is finished, or if a major plumbing leak occurs. The plastic also prevents the use of subfloor adhesive between the joists and sheathing, which is designed to prevent squeaks in the floor. Modern subfloors are usually sheathed with industry-standard ¾-inch tongue and groove exterior-rated plywood, or oriented strand board (OSB).

With post and pad construction, the subfloor sheathings are less at risk for moisture issues to begin with. That’s partly because warm indoor air leaves at the top and is replaced by outside air drawn in at the bottom, so water vapor moves upwards – away from the floor. In addition, the combination of thickness and types of glues used in ¾-inch plywood and OSB subfloor sheathings means they are less likely to absorb any moisture that might be forced into the house.

To minimize air leakage through the floor, the unsupported seams can be caulked with an adhesive sealant, such as a silicone, that bonds well with wood. The decision of whether to use or omit a plastic vapor retarder in floors using post and pad construction ultimately rests with the engineer or the local code official, who may have reasons specific to the project or building site.