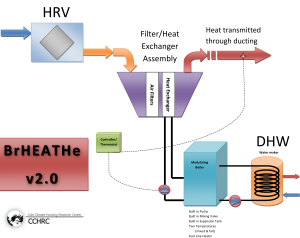 Schematic of the BrHEAThe system being used in the Buckland prototype house.

A new prototype system developed by CCHRC locks together heating and ventilation—two crucial elements of life in Alaska.

As homes are being built tighter in Alaska to save energy, less air is able to leak into or out of the building, so things like water vapor and chemicals generated from cooking or off-gassing furniture can be trapped inside. Without ventilation, they can build up to harmful levels for both humans and buildings.

Some Alaska homeowners are wary of mechanical ventilation, such as fans or heat recovery ventilators (HRVs), because they use electricity and replace heated air with cooler air. As a result, some people turn off or disable their ventilation systems.

The BrHEAThe system marries heating and ventilation so that incoming air is always hot and fresh.

Here’s how it works.

The HRV brings in fresh air and recovers most of the heat from outgoing stale air. The fresh air enters a filter box and then passes through a heat exchanger, absorbing heat from a coil connected to a boiler.

“If we pump hot water through this heat exchanger, it’s going to warm the air that moves across the heat exchanger from 40 degrees to 140 degrees,” said CCHRC research engineer Bruno Grunau.

The heated air is then distributed via ductwork throughout the home.

During a test run in the lab, the system worked smoothly: 25-degree air from outside  was raised to 58 degrees by the HRV, then further boosted to 139 degrees by the heat exchanger.

The BrHEAThe system will be installed at a CCHRC research prototype home in Buckland that breaks ground this week.

“As building envelopes are getting warmer, heat loads are being reduced. As a result, systems like this can now be used to meet heating needs,” Grunau said.

Video of a test of the heating system.