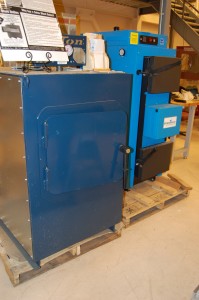 CCHRC is testing how to maximize energy from the EconoBurn, to the right

“We owe the Interior delegation some thanks. It was a joint effort on the Senate side and the House side,” said John Davies, energy policy specialist at CCHRC.

CCHRC got $180,000 for infrastructure to support a $2 million addition to the building that is currently in design; and $61,600 to develop and study a wood-fired boiler and thermal storage system. Researchers are testing how much they can conserve firewood and curb particulate pollution by transferring extra heat from the boiler to a 1,400-gallon water tank to use for heating.

The capital budget still needs to be approved by Gov. Sean Parnell.

The air quality ordinance (2011-03) was reframed after voters in October’s municipal election approved a proposition eliminating limits on the types of wood stoves that can be used and prohibiting the fining of borough residents for smoke emissions or burning certain items.

The revised ordinance will be up before the assembly for public comment at its Jan. 27 meeting.

At issue is the borough’s attempt to meet federal clean air standards by 2014 without turning air quality regulation over to the state.

Sen. Lesil McGuire, R-Anchorage, this week pre-filed her proposal to create a mechanism for funding energy projects throughout Alaska, said a press release from the Legislature.

“Over the last two years, the Legislature has made a concerted effort to address the energy challenges facing Alaskans by fostering renewable energy, encouraging innovation, and increasing efficiency,” said Senator McGuire. “Although we have made substantial progress, the challenges ahead are daunting. Billions of dollars need to be invested in energy infrastructure over the next 10 years in every part of Alaska. With oil production declining and our long term fiscal future in question, we cannot continue to rely on the same old solutions and regional politics to solve our energy challenges.

Senator McGuire’s proposal, Alaska’s Sustainable Strategy for Energy Transmission and Supply (ASSETS), would expand the authority of the Alaska Industrial Development and Export Authority (AIDEA) to invest in energy infrastructure projects. The bill proposes the state expand AIDEA’s balance sheet by investing $2 billion in surplus revenues into AIDEA over the next three years and that AIDEA’s authorization to issue bonds for energy infrastructure projects is increased to $2 billion.

We try to get the most mileage out of our cars, clothing, food and other commodities before buying more. But we don’t make the most of the electricity we have, a new report states of Fairbanks.

The report states it can be cheaper to invest in energy efficiency than in new sources of energy. It shows Fairbanks can cut its energy demand almost in half by investing $100 million in efficiency. That doesn’t mean turning down the heat but rather insulating and installing more efficient appliances and patching up other electricity-sucking devices.

A panel of state and local officials and energy experts convened Wednesday morning at the Morris Thompson Cultural and Visitors Center to discuss the report and the potential of energy conservation in Fairbanks. They said energy efficiency would save money, improve the local business climate and create jobs.

“Energy efficiency and conservation will always be our best economic value and most secure investment. It comes with a high, tax-free rate of return,” said Todd Hoener of Golden Valley Electric Association.

The report, titled Fairbanks First Fuel, was commissioned by the non profit Alaska Conservation Analysis. It explores how Fairbanks residents, businesses and industries use electricity and how they could reap savings by investing in efficiency. It recommends measures for different sectors and gives costs and paybacks of various technologies.

Continue reading: Report Fairbanks should invest in energy efficiency instead of new sources

When general contractor David Doolen and his wife Dale bought land far up Rabbit Creek Valley more than 25 years ago, they weren’t planning on disconnecting from the municipal power grid. But back then the muni would have charged the Doolens $60,000 to run up a line to connect the house to city power, so they decided to keep the lights on using solar power and a generator. Today they’ve got two solar panels in addition to the diesel generator, which is connected to a 300-gallon tank that needs filling about twice a year. One side benefit of this unique setup: When the rest of Anchorage suffers through a blackout, the Doolens’ lights stay on. “We always feel pretty smug when that happens,” David said.

Watch the video: Our Alaska: Living off the grid

Two similar projects have been tested in Ruby and Eagle. This one, lined up for use near Nenana, would be bigger — between 50 and 300 kilowatts, via small turbines and an underwater transmission cable in the Tanana River. It would operate a little less than half the year.

Monty Worthington, a project development director for the Anchorage-based ORPC Alaska, said he hopes to have the system up and running in 2012.

Continue reading: Nenana may be getting experimental in river power turbine

Begich Middle School in Anchorage has won school board approval to install a wind turbine.

The Anchorage Daily News reports it’s part of a federal program to teach renewable energy. The turbine will generate enough electricity to run up to eight computers.

Alaska is one of 11 states in the Energy Department’s Wind for Schools program.

Sherrod Elementary in Palmer also has a turbine. Schools in Juneau are working with the Coast Guard station’s wind turbine.

A Friday morning fire at K&K Recycling destroyed a warehouse after cardboard bales inside the building ignited.

The fire at the 50-by-100 foot temporary steel building was discovered by employees arriving at work about 7:15 a.m. The blaze had fully engulfed the building by the time firefighters arrived soon afterward.

North Star Chief Jeff Tucker said firefighters remained on hand throughout the day to keep the blaze from spreading outside the warehouse, but firefighters and K&K officials decided not to make an active effort to hose it down in frigid conditions.

“We could put it out, but you’d have one giant frozen mess,” Tucker said. “The decision was made just to let it burn down.”

Tucker said it’s unlikely the origin of the fire will be determined because of extensive damage to the building. He said the blaze isn’t considered suspicious.

The Fairbanks North Star Borough Assembly is looking at more than $1 million in new funding for an ongoing landfill project on South Cushman.

The project includes two major parts: sealing sections of the landfill and building a line that circulates moisture through the closed sections. The first phase of the three-year project was completed during the summer and cost about $6 million.

Both parts were undertaken so the landfill will comply with federal and state regulations. They also align with plans for methane capture project the public works department has on the drawing board.

On Thursday, the assembly moved forward with two sources of state funding for the project. The rest of the funding comes from tipping fees paid by municipalities and other customers.

Landfill managers are required to continually close cells as they fill, said Scott Johnson, director of public works for the borough. This prevents landfill gas, which contains methane and carbon dioxide, from escaping at the top and the bottom of each cell.

“We seal it with a chemically impervious membrane,” he said.

That membrane is buried by gravel, soil and grass, “so you see a grassy hillside,” he said.

Parts of the old landfill and newer landfill were closed this summer. The assembly requested $340,000 in additional funding from Alaska Department of Environmental Conservation to go toward the same project.

“I wanted to grab on to that because it’s 100 percent reimbursement,” Johnson said.

A new wood energy project in Tok has turned surrounding forests from a fire hazard into renewable fuel. The Tok School lit a new wood chip-fired boiler for the first time several weeks ago.

The 5.5-million-BTU steam boiler produces the school’s heat, saving the school district thousands of dollars in heating fuel and saving forest managers untold costs fighting fires and eliminating waste wood. The school district plans to add a steam turbine generator to the system in May to produce 75 percent of its electricity.

“We’re the first school in the state to be heated entirely by wood,” said project manager and assistant superintendent Scott MacManus, who has been trying to spur wood energy in Tok for 10 years. “As far as I know, we’d be the first public school in the country to produce heat and power from biomass.”

At the school’s new biomass facility, trees and slash are fed into a Rotochopper grinder, processed into chips that resemble wood shavings, spit into a bin and carried by conveyor belt into the boiler, which is

17 feet tall, six feet wide and 12 feet long. Fuel comes from forest thinning projects, scraps and nearby sawmills. The forest around the school has yielded enough biomass for the first year, according to Alaska Division of Forestry spokeswoman Maggie Rogers. Project leaders hope the system will be used as a model of energy independence for other school districts, communities and utilities.