Is it just us, or is this summer going fast?

As the daylight wanes to only 18 hours a day, we are getting situated to capture this heat at the Sustainable Village. The solar collectors are up on the northeast and southeast homes, which both have three 4-foot-by-10-foot collectors mounted on the south-facing wall just under the roof. The system will feed heat into radiant tubing in the concrete floor slabs, and will also dump heat into a 120-gallon solar storage tank in the house. We are adding temperature sensors and flow meters to each system to monitor how much heat is used.

Also, the homes have skin (for the most part), i.e. metal siding. Two green, one blue, and one gray with patches of other colors and salvaged dredge pipe. They look cheerful and also at home in the spruce forest. 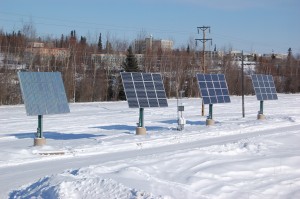 CCHRC has a 12 kW photovoltaic array that is tied to the utility grid.

Solar is a growing resource in Fairbanks, and there are two different types of panels you may be seeing around town: solar photovoltaic, which generate electricity, and solar thermal, which generate heat for space heating or domestic hot water. CCHRC uses both types of panels at the research center. While they both turn sunlight into energy for your home, they have very different applications. Considering your site conditions and heating, plumbing, and electric systems will help determine if one (or both) technologies would work for you.

What’s the difference?
Solar thermal, or solar hot water, collectors absorb heat from the sun and transfer it to water or glycol to provide space heating or domestic hot water.

The two most common types are flat-plate collectors and evacuated tubes. Flat-plate collectors are the oldest and most dominant type of solar thermal. They generally consist of a 4×8-foot glass-encased panel that contains a thin metal sheet, with a dark coating to absorb energy. Beneath the sheet are coils filled with the heat-transfer fluid. Insulation lines the back of the panel to maximize heat transfer to the fluid. Fluid circulates through the tubing, absorbing heat and then transferring it to a storage tank. A typical residential system used to supplement domestic water heating includes two panels.

A small copper pipe filled with fluid (glycol, water, or some other antifreeze) runs through the center of the glass tube. The fluid heats up, vaporizes, rises into the header pipe, and transfers heat (through a heat exchanger) to another pipe filled with fluid. This fluid carries heat to the storage tank. From here, water can be used for hydronic heating and domestic hot water or converted for other uses.

Solar power
Solar photovoltaic (PV) panels convert sunlight into electricity. They have a silicon sheet that is made up of semiconductors. When light strikes the sheet, part of the energy is transferred to the semiconductors, which knocks electrons loose and allows them to flow freely through connected wires. This flow of electrons is called direct current (or DC). The current then flows into an inverter, which changes it into AC (alternating current), the power used by your appliances. This current can either be used to power appliances (if there is demand), stored in a battery, or returned to the electric grid.

Cold Climate Specifics
Fairbanks is a unique place for solar energy because of the excessive summer sun and the virtual darkness in winter months, which means a few months a year where solar doesn’t contribute much. For example, the 12-kilowatt photovoltaic array at CCHRC produces more than 10,000 kWh from March-September (about 30 percent of the building’s electric demand) but only 1,833 kWh during the rest of the year.

Most households with solar thermal systems use them to offset their primary heating sources. If you want to use solar thermal as a main source, you need some type of seasonal thermal storage system to bridge winter months. PV systems simply offset electricity purchased from the grid in most cases.

With PV, you can produce more power from your panels year-round if you keep them free of snow and change the tilt angle twice a year. The most productive months for CCHRC’s panels are April and May, when they enjoy long daylight hours and also capture reflected solar gain off the snow cover.

Which ones are better to install?
A 1,000 watt PV array will produce about 1,000 kWh a year in the Interior, offsetting $210 in electricity at today’s rates. A two-panel solar thermal system could produce roughly 7 million BTUs a year, offsetting either 54 gallons of oil (saving $215) or 2,050 kWh of electricity (saving $410). In other words, homeowners with electric water heaters stand to save more from solar thermal than those heating with other fuel types.

The actual cost of solar thermal in Interior Alaska (roughly $4-$5 per installed kWh) is lower than solar photovoltaic (approximately $8-$10 per installed kWh). Yet PV panels are still more common in Fairbanks largely because they are easier to install and retrofit, don’t require plumbing, don’t have to be integrated into existing mechanical systems, and have no moving parts (whereas solar thermal systems have fluid and pumps that must be replaced over time).

The actual output and cost of your system will depend on many factors, like the solar exposure of your particular site, the type of heating or hot water system, the type and number of heat exchangers required, and others.

With the cost of conventional energy on the rise, solar is becoming an increasingly attractive long-term investment. Anyone with good solar accessibility may be wise to consider these systems as an option.