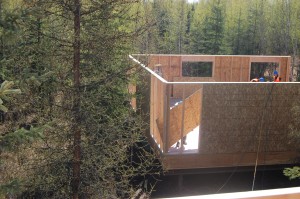 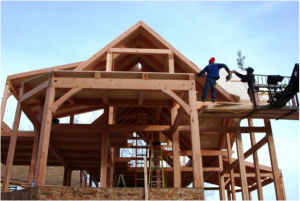 Timber frame homes are characterized by large structural wooden beams visible throughout the interior. Timber-frame construction techniques have been in use for hundreds of years throughout the world, initially brought to North America by European settlers.

The skilled craft of timber framing remained common practice until the early 19th century, at which point both milling and construction methods shifted to machines and mass production. Advances in technology, such as large powered circular saws, enabled mills to quickly produce large quantities of smaller dimensional lumber, which could be more easily transported. In turn, mass produced smaller framing members made it possible to erect a home with only a small team of builders using “stick frame” construction techniques that remain relatively unchanged to this day.

Many different tree species can be used for a timber frame, including Douglas fir, Sitka spruce, Eastern white pine, red cedar, oak and Interior Alaska white spruce. The trees are handcrafted or milled into large beams.

In the United States, there are several suppliers who cut custom beams according to a computer-aided design plan sent to them by a builder.

At the building site, the beams are assembled into a structural frame that is fastened together with a combination of carefully fitted interlocking wood joints and wooden pegs and splines. In a traditional timber frame, metal connectors of any kind are seldom used. A completed frame will contain combinations of dozens of types of joinery that make it unique.

For instance, some substructures are built like wooden furniture, where the connecting beams use mortise and tenon joinery, a process through which two beams are cut so that one has a square or rectangle opening (the mortise) into which the other beam (the tenon) fits exactly.

Usually, joints of this type are held together with exposed wedges or pegs and have the additional benefit of great strength. (A similar construction technique, post-and-beam, uses metal braces and bolts to connect beams.)

After the timber frame substructure is erected, it is enclosed, often using structurally insulated panels (SIPS), to complete the home’s envelope. Most timber frames homes have open interior designs to showcase their exposed architecture. Plus, interior walls are not needed for structural purposes.

Timber frame homes come in all sizes, from small cabins to expansive homes. While timber frame construction tends to cost more than traditional stick-frame construction, the extra planning, materials, and labor results in a truly unique and durable home.

Today, timber frame construction fills both a practical and artistic role in the building community by crafting a home that is both a shelter and a work of art.